Looks like it’s going to be yet another week of rain, or at the very least, “percent-chance-of-rain”.  Thirty percent chance of or forty percent chance of is still pretty good odds, at least around these parts.  Everything is lush and verdant.  The hostas have already achieved massive girth this season.  But the garden is wanting some sun, and so am I.  Seriously. Enough already.  The good part is that the weeds come out easily.  I have been clomping around in my rubber gardening shoes in spite of the rain.  The smell of the damp earth, the glow of green with snips of bright color against a gray sky also has its charm.    This week’s garden discoveries include a lot of mushrooms popping up here and there.  Some other gems to share:

Deep in the shade by the Japanese maple trunk within a bed of creeping myrtle (Vinca), I find the delicate columbine (Aquilegia) has returned. 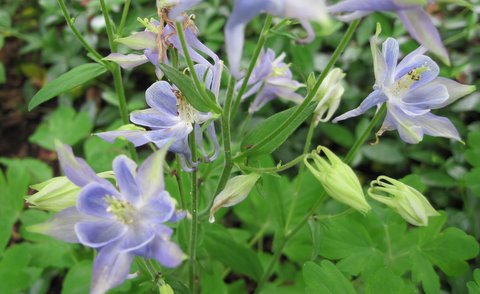 The Scotch broom (Cytisus scoparius) is a member of the pea family. Although it is a noxious, invasive weed on the west coast, in the east it is limited.  Actually, every broom I have ever had in my garden has not made it through a harsh winter – until this one.  The reason it survived might have something to with the fact that it is planted along side the house near where the furnace vents out.   The flowers on the side of the plant facing near the vent began to bloom today.  They remind me of the open mouths of baby birds. 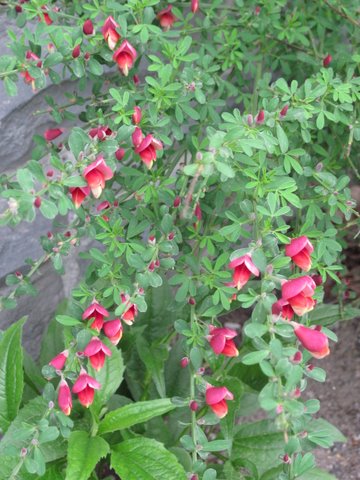 The hellebore (Helleborus)  has been in bloom since late March.  Now, in May, each flower is filled with seeds.  The flower heads bow down.  I turned one up to show you. 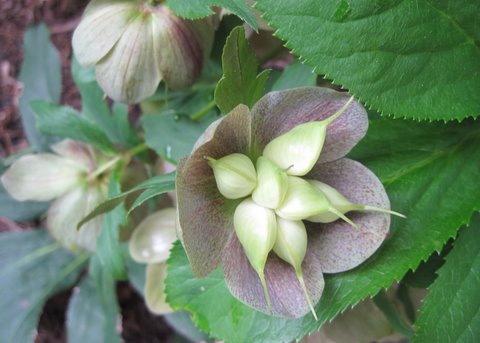 Buddha grows moss in the Rain Garden and has become hidden among the ferns.  I planted some Lobelia there to bring a piece of sky to the ground. 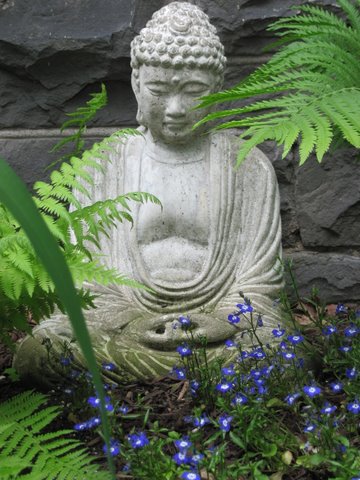 1 Response to The Rain Garden