Another “You’ve Got To Be Kidding” Award

As far as I am concerned, this little vignette ranks right up there on the “You’ve Got To Be Kidding” list.  I just have to share.

In the office where Daughter #2 is employed, there is a woman – actually the assistant to the CEO, which you would think would rate a bit on the intelligence scale –  who keeps three or four fish in a very small plastic fish tank.  Perhaps the close proximity to a sunny window, or the fact that there are so many fish in such a confined space is the cause for the greenish tinge of the water and the slime that accumulates on the side of the tank, leaving it rather disgusting.   D2 and another coworker were in the office kitchenette area when the owner of the fish came in to clean out her fish habitat.  She promptly dumped the slimy water out of the tank and right on top of a few community office dishes that were sitting in the sink, which she did not bother to move.  Then she took the dish sponge and proceeded to scrub the slime from the inside of the tank with it.  Then she put the sponge back in its place by the sink.

Can you believe this?

Needless to say, D2 was horrified. She stood speechless and frozen in the doorway.   Everybody in the department uses that sponge to wash their lunch dishes.  Not only that……if this woman was cleaning the slime off her fish tank with the dish sponge, it probably was not the first time she’s done it.  (This scenario actually brings me right back again to the time my sister scrubbed her infected turtle with my toothbrush).  What planet is this woman on?

D2 did not know what to do.  She wanted to say something but did not want to confront this woman and possibly cause an embarrassing scene.  She didn’t know who to tell.  She actually felt distraught.  When the woman had finished and left the area, D2 went over to the sink and threw out the tainted sponge. 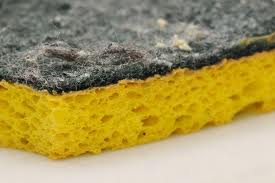 Eventually she felt obligated to share with her supervisor, who was equally appalled and handled the sensitive situation by sending a carefully worded email reminder to everybody about kitchen etiquette and sponge use.  Hopefully someone has addressed the actual Offender in private.  I wonder if this woman uses the same sponge on her dishes as she does on her toilet?   Nothing would surprise me.

I reminded D2 that in lieu of available disposable products, she should have her own mug, bowl, plate and utensils at work and should be using a paper towel instead of a community sponge to clean her dishes anyway.  And not to use a community dish towel.

Because we tend to become complacent, here are a few unsavory sponge factoids that we already know, but it would not hurt to reiterate with a few little gross-out reminders :

– There are a few hundred known food-borne diseases.  This includes Hepatitis A,
Salmonella, Listeria, Botulism, Campylobacter and Shigella.  I bet that doesn’t even include all the different bacteria you can get from a fish tank.

– The sponge and the dish towel hold the title for being the very dirtiest items in your entire home. They rank above the bathroom.

– Did you know that colonies of over 50 million bacteria can live on a dirty kitchen sponge?  Your sponge is probably seething with the potential for infection right this moment.  Your dish towel is right behind it.

–   Knowing this, it is said if you wet the sponge and then put it in the microwave for two minutes, you can eliminate the germs on and in the crevices of your sponge. Leaving it in a bleach solution by the sink is another alternative. 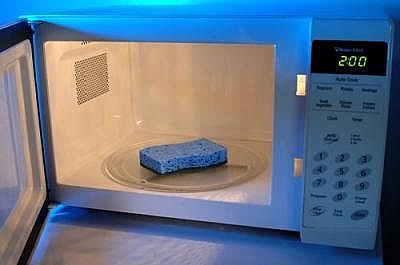 Tomorrow I am nuking my sponge. And I think every day from now on.

Like Loading...
This entry was posted in Uncategorized and tagged Are You Kidding Me?, Bacteria on a sponge, Fish Tank, Kitchen Sponge, Office Etiquette. Bookmark the permalink.

2 Responses to Another “You’ve Got To Be Kidding” Award