The three things that struck me right away about Williamsburg, Brooklyn:

3) I have never seen so much ink in one place in my life.

A land of tattoos.  Some  incredibly fantastic and some of them, well….some defy comment.  Elaborate dragons, wings, mystical symbols,  faces.  Tiny designs on wrists, circli

ng patterns snaking across necks and shoulders, backs and chests.  Vines weaving up calves.  Some intricate works of art.  There were also pieces that caused me to silently grieve for their parents.  There is a tribal feel to it all.  I looked at everything in wonderment.

I was met at Port Authority by my beautiful, upbeat and extremely accommodating friend A., who then steered us through the subway to Brooklyn.  We spent the next few days eating, walking, wandering in and out of shops, went to the village to watch a very talented belly dancer accompanied by an ensemble playing some great Egyptian music; attended an off-broadway play in Manhattan that was captioned (yay !), did a lot of talking, played some doumbek.  Good pizza.  Japanese dinner with red bean mochi ice cream for dessert, which I am craving at this very moment.  Mexican brunch.  Some of the best People Watching I have done in a while. A moonlight walk to the water to see the bridge and lights of Manhattan.   It was a very nice experience, a good time in good company.

At one point during the weekend,  A.  decided to get a mani/pedicure  This is not something I indulge in.  I don’t like enamel on my finger nails and I paint my toes rather haphazardly in the summer for a kick and without great care – they are currently purple – two weeks ago they were blue.  My kids have noted that I have either missed a few spots or the polish has actually run off the nail onto my toes, but I am not concerned.  I am a barefoot gardener, there is no point in wasting something like that on me.   So I told my friend that I would just go with her and watch while she had her nails done to a perfect, super high gloss, urban sheen.  But on our way there, we passed a hair salon with balloons out front that was having some sort of promotion fair – “Free mini-massage, mini-facial, mini-makeup”.  So on a whim I decided instead of being an audience to the manicure, I would indulge in the free mini-spa festivities while she did her thing. 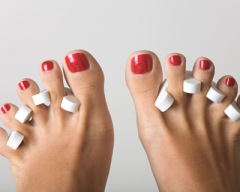 A pretty blonde woman and an enthusiastic guy in diamond bling, both very nice, very engaging,  fluttered around me so attentively.  I got into the mood.  This was fun.  Briefly pampered and patted,  my neck massaged, I ate some grapes and drank tea, and yes, bought some product.  And then I decided to have a bit of an adventure.

OK, I am in my fifties, on the later end of the fifties at that.  Perhaps still young inside, the petals are dropping off this rose on the outside, what can I say?  Some part of me yearns to be younger to indulge in my inner insanity, some part of me is so glad I am not.  I longed to be able to wear some of the fun stuff I saw on the street, stuff I used to wear or once would have looked great it, that now I could never pull off.   I cringed seeing the reflection of my wrinkly old throat in the salon mirror (how did that happen?).  And I get tired easily and early.  Those things I would have changed.  Other things I just noted with amusement. So much of this scene was just a recycling of the way my friends and I once were, over thirty years ago. It just goes around and comes around again.

So the hair…..some quick history here…… my hair has become mostly all white in the front, with a couple of streaks of purple run through it that I did a while back on a whim, and which has never totally washed out.  It is very, very wild and berserk, somewhat long, curly/frizzy hair which Will Not Be Tamed.  It never has been tamed.  Ever.  It generally makes a statement on its own, even without the purple.  I have learned to let it do it’s own thing.

For most of my life I have absolutely hated the dark, spiraling mass of untameable fusilli hair that has been me.  The irony….after many, many years, when I finally did come to some peace with what my hair was, accepted that it had its own unique way, that I was never going to have straight, shiny hair, and that some people actually admired and even envied it – it was then when it suddenly turned gray and even frizzier….just like that!  So much so that coloring it meant within three days, sparkling silver roots and a white skunk stripe would appear.  Being anti-maintenance, coloring has not been an option.  So then I had to learn to love it – and myself – in its latest incarnation, all over again.

But you know,  I really look washed out in all this whiteness. The little bit of purple streaks has given it a little pop.   It’s been purple since last October.  So here I was, surrounded by a whirlwind of youth and color and dragon tattoos.  Maybe a little bit of midlife crisis rose to the surface. Or maybe I just wanted to have a little more fun for the weekend.  I decided on some deep, cherry red, just a few streaks.  So I asked the experts in the salon if they could make that happen. “Sure honey, we can do that…and I love your cheekbones….”

The weekend is over now, and I am back home, where there is no hip urban heartbeat to pulse to. The hair – it is not deep cherry red, it’s copper orange – frizzy, orange with white patches and stripes, sort of like a giant, stuffed calico cat perched on top of my head.

Actually, I look like Bozo The Clown …….. but I am pretending to think that I don’t.  Years ago I would have been a lot more upset about this.  Now, well… I am not thrilled, and yet still have managed to feel somewhat mildly amused.

When he picked me up at the bus station, the S.O. was silent, but his physical reaction said it all….he reared back for a second in the driver’s seat as if he had been kicked in the head by a mule, and his upper lip actually did a little bit of an Elvis Presley curl.  But not a word….actually quite out of character for him. Probably smart, too.

A few hours later I asked him if he liked my hair or not and he said “Ummm…..it’s OK… I guess”.

The following evening he came out and said that I looked like Bozo. Which I already knew.  I guess somebody had to say it out loud.

The night after that he asked me how much I paid for it.  That is not up for discussion.

It will fade…..somewhat.   At least I hope it will.  My boss tactfully said he preferred the purple, but his eyes bugged out a bit.  Received a few raised eyebrows and suppressed smiles from coworkers.  Polite, polite.  In the meantime, I am going to try and rock it a bit with feathers and other adornments, because short of totally covering it up with yet another color or trying to strip it out with bleach, there is not much else I can do about it for now.  I often wear headscarves anyway.  Good thing –  I can see it is going to be a summer of that.

This is why I have never gotten any tattoos…….