It was the first birthday after a potentially life threatening and definitely life-altering illness, where the concept and approach to birthdays changed. I was never one for making a big deal about my birthday.  I think I was maybe eight years old at the last birthday party my mom threw for me, if that.  I did not have a “sweet sixteen” or a “twenty-one” party, or any significant party to mark each milestone decade.  It’s just not me.  I actually get embarrassed by that kind of recognition.

My birthday usually meant going to work, going home, maybe out to dinner if the birthday happened to fall on a weekend. It meant still doing the dishes and cleaning the bathroom.

Some of my past relationships might have diligently come up with a gift, others would not. A core of good girlfriends and sisters usually could be counted on to acknowledge it in some way.  There would be precious hand-made cards from the kids.  But essentially it was just another day.  The justification for this was that birthdays are for children, and it seems maybe sometimes for other people. I struggled with almost feeling it was too much of an ego thing to make much over a birthday.  Sometimes in the past I might have even felt just the tiniest bit blue about this.

But then I got sick.  During that time of diagnosis, treatment and recovery, I thought a lot about my own mortality.  And the next time my birthday came around, something had changed.  I was so incredibly grateful to be seeing another birthday, to mark another year.  Everything was crystal sharp and beautiful. That milestone became a magical wonder unto itself, a joyous inner celebration.  I realized that it doesn’t even have to just happen on that exact day. While it is lovely if others want to recognize it,  it is really about how I decided to savor it. I learned that I need to really learn to love myself and not depend on anyone else to do that for me – to not depend on external events to set my mood.  And I’ve been around long enough now to feel it warrants making that little celebration last for about a week.

I started sharing this concept with my fellow patients and friends and in certain web groups over ten years ago, and it has pretty much taken off  like wildfire among us since.  As a matter of fact, it seems to have gone somewhat viral in its own right. I don’t know if it was just one of those collective idea phenomenons, a sort of flash mob of people who all of a sudden decided to take the birthday week, or if I actually was a small catalyst in it… it’s possible! I now see many people mentioning taking a birthday week.  Either way, it’s a good thing to do.

As a matter of fact, this has sort of morphed into having its own set of rules…..or at least My Rules.  I mean, you are free to celebrate anything you want however you want.  There are people who will tell you to Celebrate Life every single day and yes, that’s true.  But on some level I think one should earn entitlement to the birthday week by some set of criteria, something that marks the fact that You Have Arrived.

If you don’t have a life-threatening or life-altering illness as reason enough to indulge, I think turning age fifty warrants being around long enough and having gone through enough hell fire to deserve taking The Birthday Week.  You have just graduated into the next half of the century and it’s time to really acknowledge this, and acknowledge this every single year after hitting the Big Five-Oh.  Just my opinion.  And you can start The Birthday Week any time where your birthday falls in it.  You can start it on the very day of your birthday, or start it the week before and work up to it ending it on your birthday, or let it begin and end anywhere in between. I have done it in all different variations.

Now….the way you take the week is to do something especially gratifying each day for a whole week, no matter how small. ( Not that you can’t or shouldn’t do something gratifying every day of your life anyway, but during The Birthday Week you really focus on that).  Focusing, savoring and appreciating is the key.  In a way it is almost an exercise in getting centered. I will tell you how I spent some of mine this year.

I decided to start my birthday week four days before the actual birthday.  I chose this because we were in for a stretch of incredibly lovely weather and I wanted to start on a beautiful day.

Day One was a crystal clear morning promising to be “one of the ten best”.  I got up for work, got in my car, sat in the driveway with the engine running…..and realized I just had to take the day off.  So I called out. Very accommodating boss.  I changed into my jeans, mowed the lawn, transplanted some plants in my garden, and then went out and bought myself a new garden spade.  Then I gardened with a friend in the afternoon.  That evening I hula hooped.  And after that to a movie.  I was exhausted but had a lovely, full day, just doing what I like.

On Day Two meant going back to work.  At lunch time I strolled the walkway bridge across the river.  The river was like glass and the clear blue sky so sharp that the sky became the major gift of the day.  Lunch was a portobello mushroom panini with pesto mayonnaise.  It was so delicious that it was another gift.  I stopped on the way home and picked up a couple of soft shell crabs for dinner.  I love soft shell crabs. And my favorite mango bean salsa.  And….the real indulgence…..a sheep’s milk cheese shot through with truffles. When I got home, there were two gift books on gardening from my sister-in-law waiting in the mail for me.  How good is that? This was a very overindulgent day.

Then it was the weekend. Days three through seven were filled with little and bigger indulgences throughout.  One day it was just savoring a small container of sweet

raspberries.  Putting everything aside to just lie in bed and curl up with a good novel.  Visiting a new friend. A walk and a little celebrating with an old friend.  Seeing my children.  Talking to my siblings.  Browsing the garden center and dreaming about the upcoming plants and seeds. A tasty meal in a local restaurant with the SO on the actual birth date. The big indulgence of the week (actually, the season) was the gift of a pair of coveted red cowgirl boots from my sister (I am addicted to cowgirl boots, my total inner child comes out when I wear them).   And there was chocolate, of course.

The Birthday Week finally came to its end with a lovely massage, which is something that has been built into the routine now, a totally holistic approach.  I felt incredibly spoiled and special, recharged and empowered.  Actually,  this year a number of lovely gifts came my way from people I care about, which just enhanced upon the simplicity of the birthday week.  In the past there have been birthday weeks that comprised no cost or effort at all – lovely, free pleasures to recharge the soul and celebrate oneself.  If it rains during the birthday week, you snuggle up in bed with a book and cup of cocoa – or dance in it.

Taking responsibility to commemorate living in this wondrous, beautiful world has been a step to some positive inner work…..it is a miracle we are here.  Celebrate! 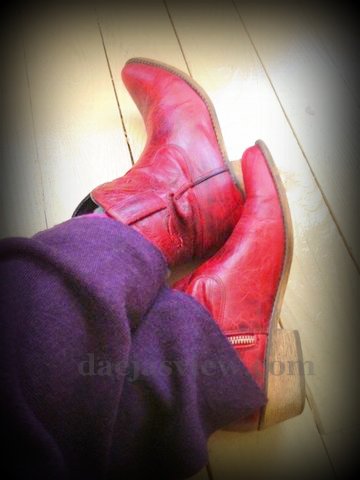 Like Loading...
This entry was posted in Uncategorized and tagged a present to myself, birthday, birthday week, cancer, celebrations, Kindness, self celebration. Bookmark the permalink.

12 Responses to Taking the Birthday Week