Speaking of compost, some strange things manifested in my garden this year.  I did not plant them, but a couple of random squash vines grew unbidden amongst the tomato plants.   All I can think is that they must have been seeds in the compost that did not break down. From the yellow blossoms sprang three acorn squash of varying sizes…..and tangled within them, one very odd mutant alien space pod of a vegetable.

The alien is round, with an underlying smooth, greenish skin the color and feel of a zucchini, but with an overlay of raised, rough, tan striations, somewhat like a cantaloupe.

After leaving it on the kitchen counter and looking at it for a number of days, it began to get just the slightest bit soft.  Curious as to what was inside, I finally cut it open.

The inside was orange and somewhat wet like a cantaloupe, but it did not smell quite like a cantaloupe. The SO and I both tasted it.  The texture was not quite as smooth as a cantaloupe but not as crunchy as a squash.  It was not overly sweet but it was not quite a squash either. Some of my friends thought I was rather brave to actually ingest something that looked so weird, much less that probably sprouted out of the compost.  My theory is that since it had neither a face nor teeth, it was probably alright. 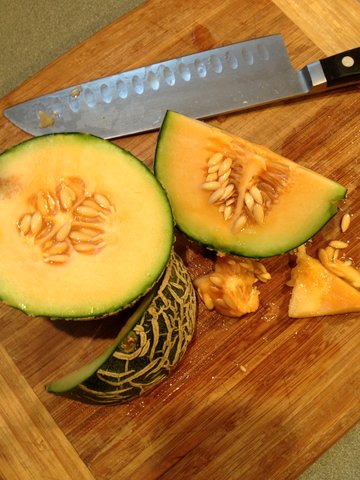 In past gardens the pumpkins and zucchini have crossbred to produce odd shapes and colors that I used to call Zumpkins and Pucchinis that were less than the sum of both.  The honeydew and watermelons have also crossed to produce oddities. But I have never had a zucchini squash and a cantaloupe melon do anything like this.  I call it a Zucchaloupe. I don’t think it will catch on.

Like Loading...
This entry was posted in Are you kidding me?, Gardening, Humor, Uncategorized and tagged alien vegetables, cantaloupe, crossbreeding squash, melon-squash crossbreeding, sprouts from compost, squash, zucchini. Bookmark the permalink.