My books are like old friends.  When it comes time to purge items from the home, the most difficult items to reduce seem to be the books.  Even when I know I am not going to be reading a particular one for a while, I pick it up, thumb through it, put it down again, find myself getting lost in it and often it never makes it out of the house. Having them in the bookcase seems to bring a sense of familiarity, connection and well-being. There are plenty of us who feel this way – there is something so interesting and homey about a bookshelf.

Out of the long-standing “keepers” are a number of bird identification books  – some of them are pretty old but have always been helpful figuring out who landed at the feeder or has been spotted in a tree.  From this collection, both the Peterson guide and the Audubon Field Guide have seen some hard use over the years. I can’t quite remember if one of the puppies of long ago got hold of it or if it was visited by mice while boxed up in an attic between moves, but something chewed much of the spine off the Audubon guide.

Although the book was still usable, seeing this has continually bothered me, bringing up feelings of annoyance, disappointment and/or dismay at any given time (which makes me think it was probably mice that did this, because I don’t reluctantly smile about it as I might had it been a puppy.)  Although the book is no longer “nice”, I have not quite been able to find the justification for replacing it.  So what if the spine was a little bit chewed off?  You don’t judge a book by its cover, right? It doesn’t affect the contents and has been that way for decades.

A recent purge led to reducing the book accumulation just a tiny bit more.  Seeing the Audubon book on the shelf caused that same feeling of annoyance/disappointment/dismay to hit me once again.  Opening it, a couple of pages that used to be attached to the binding started to come loose and I thought to myself “you know, there is nothing stopping you from replacing it”.  Cosmetics is one thing, construction another.  Being able to justify it to my own weird standards, instead of buying a new one I decided to look for another used one, but in better shape – why not?  Somehow that felt righteous, if that makes any sense.

The copy I found on the internet claimed to be in “good” condition, and was actually even an updated version of the one I had.  The book arrived.  Technically it is in “good” condition.  There are no pages missing and the spine is intact.  At one time it had belonged to a library before being pulled out of circulation.  This is not the first time I have purchased old library books from book fairs and the like.  However, it was clear this library was making damn sure that nobody was going to walk off with their book while still in their possession! This book screams “Not Yours!”

The name of the library is stamped on all three sides –  the top, bottom and along the outside of the pages, so any way you look at it you know where it came from.

Just in case that was not enough to remind you whose book it was, the name is also stamped on the inside in great big letters.

And if you happen to miss that, there is a strip with a bar code on the inside so it can be scanned when checked out. The strip was perfectly in place; it is peeled off a bit in the photo because I was working to try and carefully peel it off the book.  It wasn’t going anywhere – it is glued on pretty securely.

If you happened to miss the bar code strip on the inside, not to worry because there is also another one glued to the outside of the book (which, as you can see, I have also been working on removing, requiring solvent).

There was yet another identifying sticker on the book, but I had managed to remove it before deciding to take some photos, but you get the idea.  I have yet to go through the entire book, but would not be surprised if there were stamps or stickers (or hidden cameras) somewhere within too.

Such diligence on the part of the Duxbury Free Library, which resides somewhere in a state that I do not live in, is rather impressive.  Their efforts pretty much spell out Do Not Steal This Book, or at the very least, This Book Does Not Belong To You.  Out of curiosity, I looked up the website to see who these determined people are.  It appears to be a pretty nice library, filled with smiling people, events, and plans in the works to create an outdoor “reading garden”.
I have always felt the library is a magical place, a haven and a gateway, a portal allowing you to get lost into other worlds. As a matter of fact, my very first official on-the-books (no pun intended) job ever was in a public library.

Perhaps this sounds strange, but now that I am the new bird guide owner, even though I am happy to be part of the recycle process, I feel almost illegal walking around with my replaced copy…..as if I dared to take it into the field, people would see it and whisper “Aha! Library book thief!” 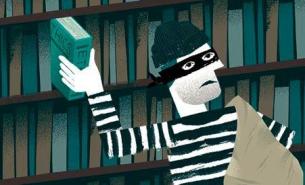 Like Loading...
This entry was posted in Are you kidding me?, Birds, Uncategorized, Wildlife and tagged library book, old Audubon guide, used books. Bookmark the permalink.

4 Responses to Don’t Steal This Book