I Found Your Wallet

It’s the second time in a few short months that I’ve searched out the owner of a missing wallet. The first one showed up in one of our garbage pails, only noticed because the area around the can was surrounded by strewn business cards and receipts belonging to the owner. There was no cash inside (didn’t expect to find any either) but there were credit cards, an insurance card and an out-of-state driver’s license. The kinds of things that are a headache to replace. Everything was soaking wet from the rain and dirty, but I went through it and made it a mission to find the owner.

According to the driver’s license, it was a guy in his early twenties. With the advent of cell phones it is pretty much impossible to find someone’s phone number on the internet anymore (unless you want to pay for it). So I turned to Facebook (the place I have recently loved to hate) to search for him.

Hardly anyone’s driver’s license photo (those mug-type shots) looks quite like the selfies people put out on social media, making it a bit of a challenge at first, especially since this person was from out-of-state and there were multiple people with the same exact name who lived closer and showed up at the top of the search. I didn’t think he had a very common name, yet there were over three hundred and fifty people on Facebook with that same name (yes, I counted, or started to, then gave up when I realized how ridiculous that was). And some of the guys with the same name actually lived in close proximity to where the wallet was found but were not him.

Luckily, he didn’t have all of his information hidden, so I was able to track down a few identifiable tidbits based on his license photo that “might” be him –  that he was working for a local candidate running for Congress (which meant, despite his driver’s license of origin, he was in the area); that he had recently graduated college (which lined up somewhat with the birth date on the license). So I sent him a message on Facebook. “I think I found your wallet, can you give me some proof it’s you?”  He got back to me in mere minutes with proof it was him.

It turns out he had recently moved to the area, and while canvassing the neighborhood for his candidate had left his wallet in his unlocked car, where it was promptly stolen. I pondered the wisdom of that and chalked it up to youth, or being a newbie to the area, or….. who knows what he was thinking…..or not thinking. Of course the cash was gone and he had immediately cancelled his credit cards, but that health insurance card, driver’s license and some other personal things inside were items he was very glad to get back, along with his soggy, dirty wallet.  When he said “I have to go call my mom, she’ll be very relieved”, I had to smile. 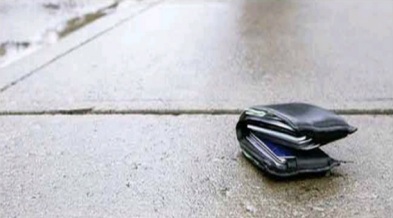 The second one was found in the gutter this morning by the S.O. while he was walking the dog. He tossed it to me and said “Here’s another one to track down”.  The wallet was wet from the rain (what is it about lost wallets and rain?) and so thick with credit/debit cards and papers that it was absolutely bulging. Of course, there was no cash inside this one either, but given the amount of stuff in it, it looked to be otherwise intact. I got to work.

This guy was in his late thirties and had a way more common name. By just scrolling down and guestimating, I would say almost eight hundred guys with the same name as his are on Facebook. It is staggering how not unique we sometimes are. Some of those people were local. And just like the last guy, the driver’s license photo didn’t quite look like what I was seeing on Facebook (glasses/no glasses. Hat/no hat. Facial hair/sort of facial hair, etc.). However, the address on the license was for a multi-family house right down the street. Which didn’t mean the person still lived there, so I didn’t want to hand over a wallet full of credit cards and other very personal info to a stranger. There were no contact phone numbers inside.

As I scrolled through the most likely photo of the person pictured on the license, I saw that it appeared they worked locally and there was a card in his wallet that also had the name of that business. People were also wishing the guy a recent happy birthday, which lined up exactly with the birth date on the driver’s license. I sent him a Facebook message but he didn’t pick it up. It didn’t look like he went on very often and he was probably at work anyway…..freaking out about his lost wallet. So I looked up his work number and called him at work.

You can imagine how wary he was when some stranger called and said “Is this ________?” I was guessing he probably thought I was a collection agency or a subpoena server, or something worse. He kind of grunted without quite telling me it was him. So I said “did you lose your wallet?”  He responded with, “Is it a black wallet with debit cards in it?” (at which point I almost said “Aren’t almost all guy’s wallets black?“). I told him I wasn’t comfortable handing over a wallet fat with bank cards to anybody without more info.  But then he told me his address and started ticking off familiar names of the neighbors, said he hadn’t noticed he lost it but must have dropped it when he got in his car for work this morning, which was parked pretty much where it was found. He also said he kept his cash in his pocket separate from his wallet, which I guess in this case is a good thing for him. He quickly left work to come and retrieve it.

So I guess in the event you might ever lose a wallet, it could be helpful to leave up a photo or some even slightly identifiable info on social media so people can find you. If it was one of those blank hidden accounts some people have, they might not have gotten their stuff back. The guy messaged me to say thank you, and I messaged him back to say maybe he wants to keep his social security card in his house and not his wallet. Not that I wanted to sound like his mother, but it’s probably one of the worst pieces of ID to lose.

Both times it felt rather satisfying to be able to get those wallets back to their owners. And now I know another person in our neighborhood.

Like Loading...
This entry was posted in Uncategorized and tagged finding someone on Facebook, found wallet, lost ID, lost wallet, Neighbors, you dropped your wallet. Bookmark the permalink.