Every time I would visit my mother, she would dig the boots out of the back of her hall closet and urge me to take them.  As the story went, Aunt Rose, who had expensive taste in clothing and often bought things on a whim that she later did not use, gave her “these lovely boots”.  The boots were winter boots, about calf high, a heavy leather/suede combination with  fleece lining and rubber soles.  I don’t know that they were necessarily made for snow, but they were definitely made for cold weather.  My mother insisted that they were well-made, beautiful and that they would keep me snug and “warm as toast”.  She had only worn them a couple of times.  I don’t know why she was not keeping them herself, but my mother was hell-bent on having me take them.

I resisted.  They looked like old lady boots to me.  They were not in style. To appease her, I tried them on and clumped around her living room to demonstrate that I looked and felt like a clod in them.  I actually did this a number of times.  She would beam at me in approval.  “Aren’t they lovely boots?” she would say. “Aunt Rose bought them. They were expensive”.  “They will keep your feet warm as toast”, she would reiterate. I would make a face of distaste and then she would make a face of disbelief, as if I was a total fool, too blind to see the value in such boots. She would then put them in a bag near the front door so I would take them when I left.  When it would be time to go home, I would conveniently forget to take the boots.  After I would get home from my visit, I would then get a phone call from my mother saying “you forgot to take these lovely boots”.  We played out this same scenario for years. By years, I mean almost a decade.

After my mother died, we were cleaning out her home and I came across the boots, these lovely boots, neatly standing in the back of the hall closet.  All of a sudden those boots, along with everything else about my mother, became extremely, painfully important.  I took them home and put them away in my own hall closet.

On the first big snowfall after her death, I wore my mother’s boots for the first time…..and wouldn’t you know it, they were warm as toast. Not only that, but it appears that over the past decade, these lovely boots had suddenly come into style. As a matter of fact, almost every time I wore them, someone – men and women alike – would exclaim “What great boots! Where did you get those boots?  I LOVE those boots!”, to which I would always reply that they were “My Mother’s Boots” – and that is how I see and refer to them now.  I am never putting on my boots; I am putting on My Mother’s Boots.

I am not a winter person. I am not into winter sports and I don’t spend a lot of time outside in frigid weather anymore.  Honestly, winter is just not my season. I don’t do cold well and my tolerance of the winter months has lessened since I have reached adulthood. Except for the necessity of commuting to work and the food store, I could just stay in the house all winter long if I had the choice.  I like watching the snowflakes fall.  I like the sacred hush that occurs shortly after a heavy snow. I love the sculpture of

drifts and the reflection of moonlight on snow. I enjoy making maple syrup snow cones from the first fresh snowfall.  But I am not into being out in it. I have been resisting it for years.  However, since I acquired My Mother’s Boots, my relationship with winter and snow in general has tempered. As a matter of fact, when I have My Mother’s Boots on, things seems to be a lot more right with the world.

My Mother’s Boots only come out after a storm and are only worn on the snowiest of days.  They are not for running through slush puddles, they are just for keeping your feet warm. Because of this, they have lasted many, many years, although they have begun to show some wear.  Over this past week we experienced a couple of heavy, icy snow storms.  I hibernated for a few days, but eventually it was time to get out there, get in the car and go back to work.  I put on My Mother’s Boots and headed off to my job, which is about a forty-five minute commute.  At first I chugged along in one open lane behind a line of cautious cars, but at the approach of the bridge that spans the river which is the heart of our valley,  I was met with a fairy tale view of the hills that sparkled like shattered crystal.  It was exquisite.  I wish I’d had my camera with me, and indeed others were pulling off the road to take pictures on this dream-like morning.  It was truly a National Geographic moment.

Taking my chances, I turned off onto a back road shortcut which was packed down with snow.  At 7:30 in the morning, there was hardly anyone about. The early sun was glowing through the trees and lit up branches laced with glistening ice.  Every bend in the road revealed yet another glimpse of such radiance that I did not want the drive to end.  I was so overwhelmed by this enchanted winter vision that I could feel the impact like a small explosion in my heart.   At that very moment, I wished I’d had someone with me to share this magnificent morning, and I realized that I wanted that person to be my mother.  As I thought about this, I was simultaneously aware of how cozy, how safe, how content, how totally present and connected to my mom  I felt while wearing her boots.  My Mother’s Boots.  My beautiful mother’s boots – these warm as toast boots;  these lovely boots;  yes, these lovely, lovely boots. 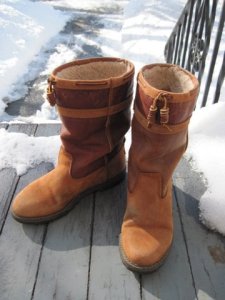 3 Responses to These Lovely Boots