Finding out someone has hit your car and taken off is an upsetting and enraging experience.  A couple of weeks ago, my daughter called to tell me that she came out of work to find that someone had hit the side view mirror holder on her car (my car), breaking the part of the body that actually holds the mirror.  The car is not new and does not have collision on it.  While this was not major damage, it was disheartening for her to find this and for me to hear about it, and I felt saddened.

Trumping that event, this morning my nephew came out of his house to find someone had actually skid/driven off the road and hit his car which was parked i

n his own driveway, with such force that it knocked the car clear across the yard.  Witnesses saw two men get out to look at the destruction, then quickly get into their own car (which I seriously hope was equally as damaged) and speed away before they could be stopped.  My nephew’s car was totalled.  Because it is not a new car, he does not have collision insurance on it and will now have to rent a vehicle to get to school and work while searching for another vehicle, which he cannot afford.

I think people who do things like that are scum.  I am sorry, but I feel that way. They are scum, and if there is such a thing as Karma, I hope it is coming around in spades to those who do things like this to others.  I have been a victim of this variety of dishonesty and scummy-ness myself twice already.  The first time I was house-sitting and came outside in the morning (the morning after St. Patrick’s day,as if that might explain it) to find that our Chevy, which had been parked in front of the house, had been hit so hard that the entire driver’s side, from front to rear, had been smashed in. I don’t know how it is that we didn’t hear it – possibly because we were sleeping in a room facing the back.  I recall standing out in the road, on the edge of tears and somewhat in shock, looking at that ruined car.  The damage was incredible and the car was totalled.  This was not an incident where someone “wasn’t sure” if they had “tapped” the other car.  They hit the car with tremendous force and took off.  No note was left – nothing – and our financial situation at the time did not warrant being able to afford another vehicle. 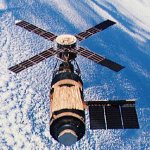 wheels and prying the doors out with a crowbar, and trying to patch the undercarriage of the car as best as possible.  Due to the impact, it was left a pathetic, creaky eye-sore and anuisance to get in and out of.  The damage was so severe that pieces of the car continued to drop off at any given time, earning it the nickname “Skylab”.  We drove Skylab for another couple of years until it would not pass inspection due to the rust that set in following the accident. When I think back on that situation years later, it still can make me angry.

The second time it happened, I came out of the supermarket to find the rear door and panel by the gas tank on my one year old Toyota (still brand new in my mind) had been hit and creased in.  Once again, no note or message left.  It is an incredibly violating experience.

When these things occur, I feel emotionally hurt.  Not just because someone has been so inconsiderate and unkind after inflicting damage on my property, which is in essence damage to me, but because it invokes a lack of faith in mankind which I find particularly painful.  It is a feeling that causes me to mistrust and dislike people, not a good feeling.  It is times like this where I want to go back to the “Leave It To Beaver” and “Father Knows Best” world, a time when people appeared to have a conscience, appeared to be more decent and honest.  Actually, a time when you didn’t even have to lock your car, or even your house for that matter.  A era long past that is as ancient now as the typewriter and the dial telephone.  Very sobering.

Like Loading...
This entry was posted in Rant, Uncategorized and tagged car damage, hit and run drivers, property damage. Bookmark the permalink.

2 Responses to Hit and Run