It is with a great, disheartening sigh that I have just seen a number of recent

photos of myself.  After such rude and irrefutable proof, there followed the panicked realization that I have let my hair go for waaaaay too long without a hair cut and it has become a bit outrageous.

I have long, very curly/frizzy, gray/white, berserk hair. It does not grow down, it grows Out. Due to a history of repeated haircut disasters, I have tended to avoid them at all costs. Even after having my hair cut and styled by people who specialize in cutting curls, in the long run this hair just does what it wants.   Because of this, I have become so scissor-shy that I have been known to go many  months, or sometimes years, before I will allow shears to be taken to my head.

But today, I suddenly looked in the mirror and realized it had to come off – immediately.   It has reached the point where from behind I look like a geriatric “Cousin It” when I wear it down. When it’s up, the effect is somewhat like a fountain of white spray sticking out of the top of my head.  I realize I have been wearing scarves and hats and elastic bands in my hair for months.

There is a big part of me that wants to chop it all off, super short and carefree.  In my fantasy mind I will look great.  But I know what will become of my face if this happens.  Super short is meant for those with that gamine look…..waifish, with big doe-eyes, little noses, elfin ears, defined jaw lines.  I can’t pull that off and never could.  I would need a nose job and a face lift and Japanese straightening to get that look.  If I cut my hair short, I will look like an old man.  When I cut my curls short,  I actually look like Harpo Marx. I have been the victim of scissor-happy stylists who have turned me into Harpo.

Falling somewhere between It and Marx, There is a point between, usually on  dry days, when my hair will suddenly take on this Über Cool look. During those magic times, it can be funky and almost Medusa wild, in a good way.  Total strangers will 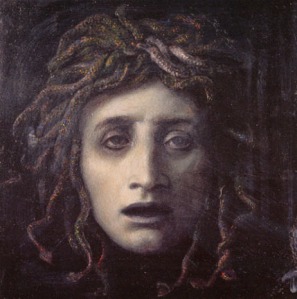 even stop me on the street and say “I love your hair!”…”Don’t ever cut your hair!”…”Don’t let anyone talk you into coloring that hair!”.   I am always amazed when this happens.   But then, whatever it was that generated the attention is gone again, as unpredictably as it appeared, and Medusa Wild will inevitably morph into Medusa Scary.

Ironically, the place I have found that I trust to cut my hair is not an ultra chic salon, but a private shop that a local young mother runs out of the basement of her home.  I go there and tell her what I want and she does it and does it for a very decent price. I go there so infrequently that I always get her name wrong, which is kind of embarrassing.  Today, when I showed up after work

in my Cousin It Phase distress, she literally cut about five inches off it and seriously thinned it out.   When I looked on the floor, the remains of my hair lay there in a giant heap which resembled an animal; kind of  like a dead possum, or at least a possum playing “possum”.   But when I looked in the mirror, I could still see a woman with a massive amount of hair on her head.

And now, I am home, feeling pounds lighter but still with Big Hair. I am going to go into the bathroom, try to get it wet and put some Product into it in an attempt to tame the beast.  I think almost all women with Very Curly Hair know this predicament, and sometimes despair.

This hair defines me, and sometimes it owns me.