After spending the day exploring the Spice Market and touring around in the Sultanahmet district, it finally got to the point where I seriously had to pee, and very soon, so the search for a bathroom began in earnest.  In the middle of a large, open square with cart vendors selling roasted chestnuts and hot tea and men hawking boat tours on the Bosphorus, I located the public toilets, a big sign overhead reading TUVALET.

Of course, there was a waiting line on the women’s side, which led to a window where you had to pay one lira for the privilege.  Slowly shuffling closer to the front revealed three stalls.  As each woman finished her turn and came out the door,  I was able to catch a glimpse of what was in store.   Stalls one and two contained squat toilets, essentially a porcelain hole in the floor that you  hover over.  The third one was a western style toilet, the one we are most familiar with at home.  I decided I really would like to end up with the friendly western 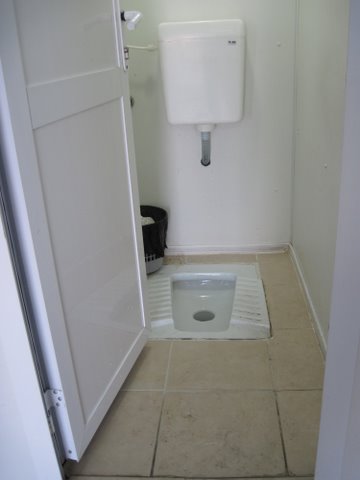 bowl behind Door Number Three, but it really was a matter of Tuvalet Roulette.  Depending on who finished when would determine where I would end up.  As I moved closer to the front of the line, I actually considered possibly giving up my turn if any other door besides the third became available.  I wasn’t sure what I was going to do.

Finally I was next.  I was psychically willing Door Number Three, but it was Door Number Two that opened for me.  A squat toilet.  I looked around at the other expectant women and suddenly decided to just go for the experience when in Rome  (or in this case, Istanbul).  So I went for it.

OK, I will tell you that I wasn’t really sure which way one should be facing for this event.  I don’t have experience in this department and it was not very apparent to me.  After a quick deliberation,  I decided facing the door and always keeping your back to the wall, be it a saloon or a toilet stall, was probably a good idea, so that is the way it went.  Behind the door, on the floor next to the squat was a little plastic pipe with water running out of it into a plastic bucket that had a drain in it.  Presumably this was meant for “the wipe”, in lieu of paper.  Traveler that I am, I was happy to have a packet of tissues with me.

I know this probably sounds silly, but I walked out of there actually feeling a bit satisfied, not just at the relief of finding a bathroom, but at having had yet another small adventure.  Cheap thrill…..

Like Loading...
This entry was posted in Humor, Perspective, Travel, Uncategorized and tagged adventure, Istanbul, squat toilets. Bookmark the permalink.