The Second Amendment, adopted years later in 1791 – “a well regulated militia being necessary to the security of a free state, the right of the people to keep and bear arms shall not be infringed.”  Well-regulated militia.  Militia.  A militia with muskets, with the intention of keeping our country free.  Not politically motivated lobbyists with an agenda. Not mentally ill individuals and untrained citizens running loose with 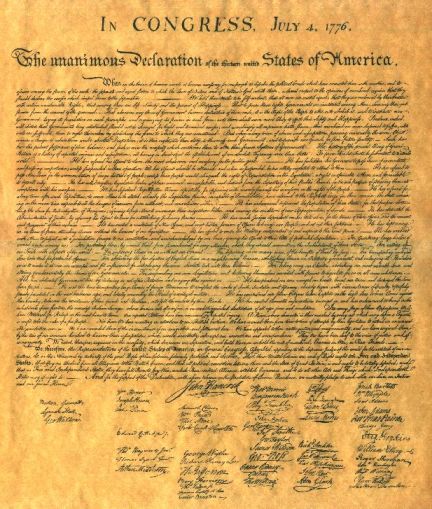 high-powered assault weapons, with the possibility or intent to slaughter innocent populations at whim. It seems the meaning of our Second Amendment has become grossly distorted.

Want to talk about rights here? When you can no longer ride public transportation, shop in a mall or supermarket, go to work, enjoy a movie in a theater with friends, attend a place of worship with family or even attend school without fear of being killed or maimed by madmen “legally” or illegally armed with assault weapons, I would say that your Certain Unalienable Right to Life, Liberty and the Pursuit of Happiness has been severely infringed upon – has pretty much been taken away.

It is ironic that with all the armed personnel on base at Ford Hood in 2009, it did not prevent the mass killing at that military installation.  And that all those self-armed citizens who happened to be packing weapons on their person that very day in a Tuscon supermarket in 2011 were unable to use them due to the chaos that ensued, the fear of killing more people by accident, their lack of training.  Arming teachers? Arming students?  Assault weapons?  A mad rush to Walmart to buy your gun “just in case” they are banned? Child-size bullet-proof book bags being sold this week following the tragedy?  As a country have we really reached this level of insanity?

Today –  December 21, 2012 – according to some misinterpretations of the Mayan calendar, was to be “The End of the World”.  For those children and families of Newtown, their apocalypse occurred a week early.  Their certain unalienable rights were violated in the most horrific of ways.

It seems the end of the world as we know it in this country has already arrived.