A Mermaid Farewell, or The Last (Hip) Hurrah

While deleting over a hundred spam hits, it really drove home how lax I have been about posting anything.  Distraction has been the issue.  A lot of new things have popped up in my life that have grabbed my focus away – things that deserve comment and will be shared in future posts, I promise.  New dog.  New grandbaby.  And very, very soon, a new hip.

Why someone Not That Old should be needing a total hip replacement is something that continues to floor me.  What caused this to happen?  Was it the major fall I took from slipping on smashed green beans while hurrying past a salad bar in my clogs on New Years Eve, so many years ago?  Was it all that yoga, where I pushed myself into positions just beyond reach in the quest for greater flexibility? Is it genetic?  Or just bad luck?

Whatever it is, the increasing instance of pain has curtailed just about anything I have wanted to do and has had a major impact on my life.  Hiking? A thing of the past.  A trip to the city?  Out of the question.  Even a walk through a shopping mall, which is something I never do anyway, is not an option.  Soon it was trying to get up stairs, or walking a few blocks uptown to the farmer’s market….. and then even sleeping at night began causing pain if I moved the wrong way.

But it has been intermittent pain.  One minute the stab of lightning is so great it makes me gasp, and then a few moments later perhaps nothing at all, as if the hip is just fine and it is all my imagination.  Which is part of the reason I waited so long.  Maybe it would get better on its own. Maybe it was all in my head.

I got a few medical opinions – conflicting ones, which made the decision even harder to make. Yes, the damage shows on the x-rays, but the “good” hip that doesn’t hurt actually looks worse than the one that does.  At one point I had finally decided to go ahead with it….until the surgeon sent me home with some pamphlets that had cartoon depictions of hunched over ninety-year old people with walkers, limping through their recovery.  Talk about bad advertising!!!!!  Where was the pamphlet targeting younger people with sports injuries?  Where were the people like me?

I was so turned off, depressed, and freaked out by this that I actually cancelled the surgery date.  I know people have this operation all the time and do well, but to be honest, the thought of having the top of my femur sawed off and some foreign body installed that will be setting off TSA alarms in the airport for the rest of my life is beyond less than appealing. I am mourning the imminent loss of my hip. And because I am sort of geeky in this way, I’ve watched those YouTube videos of the surgery and have managed to skeeve myself out pretty well.  But finally, I am caving in to the total hip replacement – by the anterior method –  which is happening tomorrow, in fact.

So ………while getting some things in order this past week in anticipation of being slowed down, a friend asked me – quite spur of the moment – if I would like to go to the annual Mermaid Parade on Coney Island.  Those of you who read this blog might recall that I ended up in the parade two years ago – here.  I figured that was more than it for me.  But suddenly, this option manifested itself and seemed like the opportunity for a Last Big Hurrah for my old hip.  And so I decided to go.  With a cane.  And analgesics.  And back-up pain medication, if needed.  I mean, really, what else could I do to it at this point?  It might as well go out in style.

I am impressed to say I walked the entire length of the parade in my mermaid blue; all the way down the crowd-lined street and up the board walk in a blur of kaleidoscopic color.   OK, there wasnt’ really any dancing involved, but I made it with the cane and some Extra-Strength Tylenol.  I didn’t even need to break out the Big Drugs.  The weather was really nice and my friend was so well prepared in the most motherly sort of way, so we had plenty of water and healthy things to snack on.  We rested on the beach in the shade of a building afterwards, and later I walked down to the water for a glimpse of the sea.   We had made it through the day.  People cheered us on and wanted to pose for photo opportunities with us. It was a major party.

Although I don’t think I will do the parade again, for this hip it seemed a fitting  farewell. 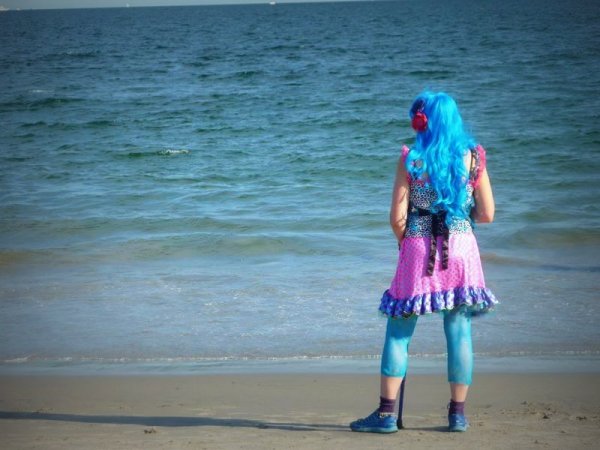 6 Responses to A Mermaid Farewell, or The Last (Hip) Hurrah