Some people have issues with The Empty Nest after their children grow up and move away from home.  For me this has not been much of a problem.  The teenage years of my youngest were so   intense that I believe it actually accelerated the whitening of my hair.  And so when the last child grew up, moved out and pulled her life together, as even some of our wildest kids are apt to do, a peace descended upon the home and I did not find myself rattling around at a great loss but instead proceeded to discover other pursuits and enjoy my life – as long as I remained in regular contact with them.

Over these empty nest years, I have often thought of bringing a new dog into the home.  I dog-sit sometimes for a friend (and also for my former wild-child, who brings her little dog home for visits).  However, much like grandchildren, you can enjoy them and then give them back.   Having a dog can definitely restrict some of your spontaneous movement.  And then there was that part about Getting Attached.  Just the memory of the loss of past dogs, even though it is going back decades, can cause me to well up with tears.  So I dog-sat instead.  But then I started looking at the myriad of rescue sites on social media, which narrowed down to becoming one specific rescue site that ran regular adoption clinics.   Then all of a sudden it was one particular little dog that kept showing up which caught my eye. 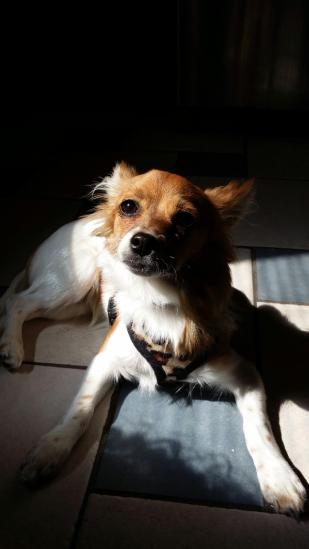 He was an endearing little calico-colored guy with big radar ears.  They would run photos of him, “waiting for his forever home”, and then there would be a clinic and he would not be adopted.  The next week it was the same thing – fetching photos a small dog sleeping next to other dogs being fostered, curled up like a little package on a blanket.  But not adopted. And the week after that too.  Maybe it was even four clinics (I forget now) and nobody had taken him home with them.  My rational mind was saying “What is wrong with this dog that he hasn’t been scooped up yet?”  while the emotional mind kept whispering “Go get him”.   I contacted the site and got the number of the person who was fostering him to ask a few questions.  She said he was a great little dog.  She also said he had a few “quirks”.  Well, don’t we all……?  So that very next weekend, I decided to take a ride upstate “just to check it out” and see.

Now, the back story to this is that the Significant Other does not want a dog. He’s always been more of a cat person, while I have been a dog person.  And worse than not wanting a dog, he is not crazy about small, yappy dogs.  Actually, I have never been fond of small yappy dogs either.  The smallest dog I ever had was a solid 25 pounds of howling beagle.  But I figured at this stage of my life, a smaller dog would be easy to clean up after, easy to lift up, easy to take places.  I could depend on the dog to alert me to when someone was at the door, since I can no longer hear that sort of thing.  Who knows, maybe the dog could be trained to be a hearing dog, a wonderful service dog.  I thought back to my years of being a veterinary technician, of the dogs I had trained, of the litters I had raised or cared for. This would be a snap.  The S.O. would soon see what a wonderful thing having a dog in your life could be.  It would be so great to have a canine companion again.

So I arrived upstate for the clinic, which occurred in a strip mall outside a big name pet store.   There were a number of pens set up that were filled with an adorable variety of small, newly groomed, tail-wagging dogs of all kinds.  I zeroed in on the one I had been thinking about, which appeared to be a sort of Papillon-Chihuahua-Whatever mix.

Well, he was even smaller than I had pictured,  just a bit over seven pounds and maybe a year old.  His hair was longer than I had wanted, and honestly, I really was more interested in getting a female.  While the other dogs were wagging their tails, barking and leaping up against their pens amidst the chaos of interested adopters, this dog was totally glued to his foster person, disinterested in anybody else and a bit tense and morose.  I picked him up and tried to walk with him away from the throng of grabby people to feel him out a bit.  He let me take him but it was clear he just wanted to get back to his foster person.

I asked her why he wasn’t adopted after all this time.  He had been a mill puppy and spent his entire life in a cage and was not really socialized.  Nobody had bought him, nobody had wanted him.  He had been en route to being “thrown back” and perhaps in for even a worse fate when someone from the rescue org had seen him.   She said he was rather attached to her and not engaging, so people were not gravitating to him at the clinics.  She also again mentioned that he had a few “quirks” but I didn’t really hear what they were beyond that “he likes squeaky toys”.   He leaned up next to her again and seemed to shut out everything else going on around him.  And then something just wrenched in me and there I was, calling the S.O. and saying “please, please can’t I bring this dog home?  And I adopted  him.

As we drove away, he stood on the seat with his paws against the window looking for his foster person, and he cried.  Then he gave a resigned sigh, curled up in a ball on the front seat next to me and was quiet the entire ride home.  I thought to myself that this is the last time he would have to go through this kind of loss.  From that point on he was glued to me. 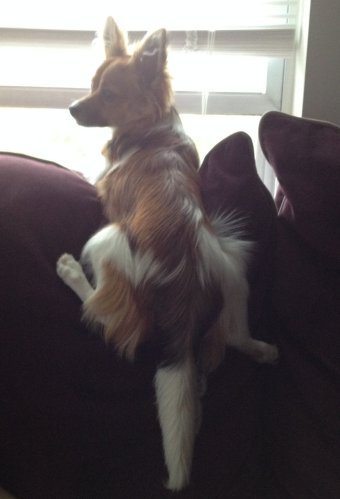 Even if you leave for an hour, it is as if you left forever.

We named him Rudra from Vedic Sanskrit hymns, which appears to translate into many meanings –  “the roarer”,  “the mightiest of the mighty”, “the howler”, “to cry “,  “the red one”, “the wild one”, and “extremely terrifying” – all or none which might apply to him at any given moment it seems.   Rudra was instantly morphed into Rudi. 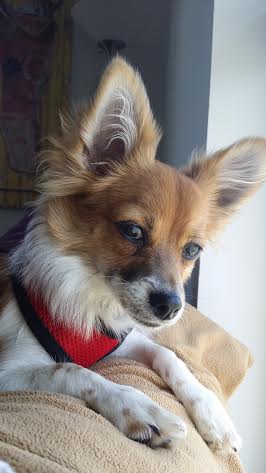 They say rescue dogs and especially puppy mill dogs will often have problems. Rudi’s “quirks” immediately became apparent, although some of them are good quirks. He clearly has abandonment issues and does not let me out of his sight. If I leave him home for even a half hour, he yips and cries in excitement when I return, as if I have been gone for weeks.  Everywhere I go, there he is following me.  If I am in the shower, he is poking his head in the curtain to make sure I am there.  If I close the door, he is waiting outside of it.  As I type this, he is in the chair next to me.  When I move into the bedroom, he will follow.  He will only leave my side if another dog is around for him to play with.

I will say, he is a constant little buddy.  He has a sense of order.  He will pick up his toys and put them all in his dog bed.  If I remove the small striped towel from his bed and put it into his crate, he will remove it and put it back inside his bed.  He doesn’t sleep in his crate but it is there for him if he wants to retreat, and he clearly wants one towel in his crate and the different one in his bed.  I couldn’t believe it so I tried switching them again and he went and removed his bed towel from the crate again.  Maybe he has a little OCD.

He has been helpful to me. While he is not official, he is still an assistance dog.  He barks when the mailman drops off the mail. His expressive radar ears are constantly going, letting me know what direction sounds are coming from, who is walking behind me, etc. And in one brilliant move where I thought for sure I had a great little service dog, he stared towards the kitchen and kept barking at “nothing”, until the S.O.  finally got up to investigate what “that dumb dog is barking at” and discovered the toaster oven was on fire.

He is terrific with other dogs and seems to get along with just about every dog he meets. He actually has a few dog friends and relatives that he enjoys visiting with (plays well with others!) 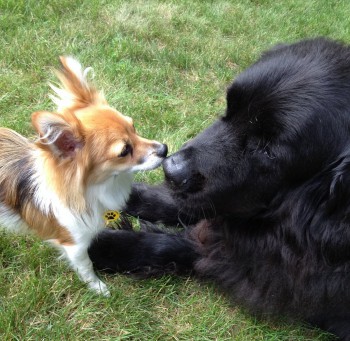 Plays well with others…. 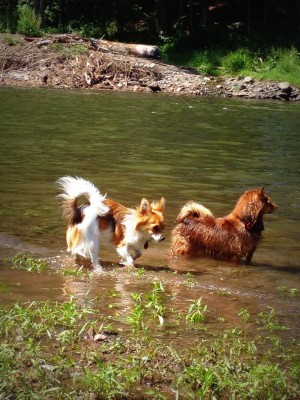 Usually a follower, willing to go along… 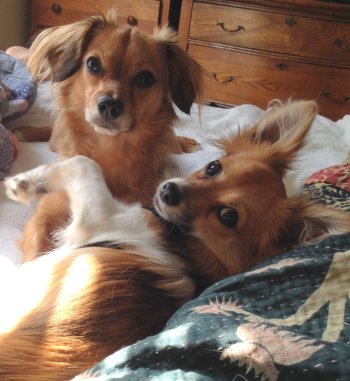 I cannot say the same thing about people though.  When the S.O. comes anywhere near him, he growls, despite bribes of good food.  While he is a bright, loving little dog (to me) with lots of potential (I can tell!), he is what is considered a “fearful dog” and it is clear how not having early socialization has had an impact on him.  Over the last few months he has been here, he continues to avoid and back away from people, has an obvious fear of men, and when most people (besides me) try to pet him, he will lean away with discomfort while he barely tolerates it.  He doesn’t show his teeth or bite…but he often growls in fear.   This does not bode well for a service dog, although the jury is not out on this yet.  As the S.O. so aptly noted, Rudi has “worried eyes”.

When the S.O. comes home from work, Rudi becomes physically tense, elongates his neck like a submarine periscope, starts up with a low rumbling growl much like the motor sound of a loud cat purr and puckers up his mouth in disapproval, which we now call “Pucker Mouth”.   I haven’t been able to get a photo of Pucker Mouth, which is subtle but also quite distinctive.  Night after night this does not change.  I have heard that sometimes it takes a very long time for these rescue dogs to acclimate. I am hoping he will get over this at some point.  Nobody likes being rejected, even if it is only by a seven pound dog.  It figures that the S.O. did not want a dog and now, despite all his efforts, Rudi will not bond with him.

Every time I think he is finally housebroken and we have gone for a significantly long stretch without an accident, suddenly there will be a setback. Luckily, as I imagined, they are very small accidents.  And today he threw up in my car (again).  It appears I have forgotten much of what I knew back in my vet tech days and although my past dogs were wonderfully trained, I seem to have forgotten how I managed that.   Now that I am paying for those services, I am somewhat shocked at what pet food and vet visits and obedience classes cost.  Guess I have been out of the loop for a long time.  Despite the quirks and the costs,  it’s all worth it.  On some deeper level, I have to wonder which one of us is really rescuing the other. 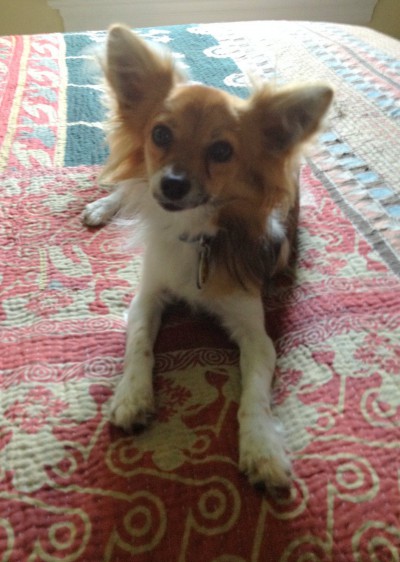