Beneath the kitchen counter there is a corner cabinet with one of those two-level turnstile type lazy-susan gizmos which is supposed to allow you to easily view and access your stored canned goods and other groceries. I hate it. I hate it with a passion on a daily basis. Having had one in my last kitchen, I vowed I would never, ever, want one again.  It gets loose, becomes wobbly and doesn’t turn well. Smaller items fall off of the back of it and land in the corner into a dark no-man’s-cabinet-land, where it jams the flow of the turnstile and will never see the light of day again, until you move away and someone else finds it while doing a kitchen demolition years into the future. 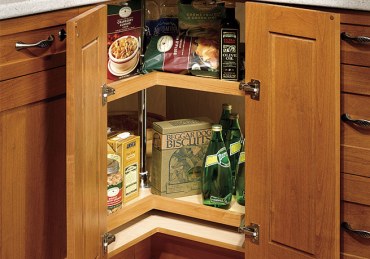 Example of a lazy-susan corner kitchen cabinet.  This tidy one is not mine.

Therefore, it is with tremendous dismay that I ended up with yet another one of these abominations.  When the Significant Other was renovating the kitchen about ten years ago, I kept making suggestions as to what I wanted in a kitchen, figuring this was probably the only opportunity I was going to get regarding a new kitchen. He quickly got fed up with my input. It really isn’t the kitchen I had envisioned, but at least it was new, and at some point amidst the reno chaos I realized I needed to back off and allow him some say in it. As part of his man-decision, he insisted a corner turntable shelf was something that should be installed. There comes a point where you need to pick your battles, and so I stayed quiet – but I am so sorry I did.

So here we are in the present day, where I do regular battle with the hateful turntable shelf.  I try to transcend how much I absolutely loathe it. It is an awful thing to actually despise something every. single. time. you use it, even if it is only a kitchen cabinet. One way to avoid dealing with it is to store things that are not going to be used too often.  The popcorn maker, the salad spinner. Extra boxes of tea, pasta sauce, obscure spices. It is laden with those things – apparently too many of those things – because it had gotten to the point where it has tipped to one side and you have to balance jars and boxes carefully within. Recently it has reached critical mass and will not move more than a few inches, making it necessary to finally sit down on the floor and tackle cleaning it out.  That happened yesterday.

The S.O. tends to buy multiples of the same item.  He will open the refrigerator, a cabinet door or drawer and stare into the space without looking, then make a declaration that the item does not exist, even though it is staring him right in the face. Historically, this seems to be a common occurrence not only with men, but also with teenagers. Then he will buy another one and lose that one too as it mysteriously becomes invisible. Needless to say, I have been on his case about this in the past, for example, during “the great nail-clipper discovery”, which was mentioned during a major clean out in a past post.

He keeps buying nail clippers. I found eleven of them in the house.

Or the fact that not too long ago, he was grousing around the kitchen complaining that there was no relish left. I ventured into the dreadful turntable cabinet and found (no exaggeration here) six jars of relish. Six.

So as I sat down to deal with the turntable shelf contents, I was prepared to find more cans and jars of S.O. hoarded groceries. There were a few. He seems to have a penchant for barbecue sauce.

Gearing up for summer?

But it is with great embarrassment that I discovered in this case, the hoarder is actually me.

Aside from the four large bottles of lemon juice, five new boxes of assorted herbal teas, five jars of pasta sauce, multiple jars of cinnamon, extra bottles of vanilla extract and containers filled with fennel seed (!!!) there were the expected odds and ends like peanut butter, jam, mayonnaise, and corn starch. However, there were some unusual surprises. I am adding photos of what I unearthed here so you can get the gist of this. Of note:

Three jars of coconut oil, one expired, in addition to the two existing opened ones. That’s five. 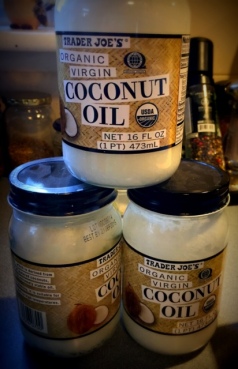 Three jars of chutney, to add to the two open jars in the refrigerator. Total – five.

Because you know, a person can never have enough chutney….

Three bottles of green hot sauce.  There is one bottle of green and two of hot red in the refrigerator already.  Total – six.

Because you can never – ever – run out of hot sauce.

From here it gets a little more interesting. Six bottles of tamari sauce. Plus one in the refrigerator. Total – seven.

In case I ever want to open a restaurant

And finally, all things pomegranate and tamarind. Six bottles of varying sizes, containing pomegranate molasses, pomegranate juice, pomegranate concentrate, along with tamarind syrup, tamarind paste and jallab syrup.  There is also a bottle in the refrigerator. That makes eight.

Because when the revolution comes, running out of pomegranate molasses would be devastating

Given all of this, you can only imagine what the inside of the refrigerator looks like. I’ll spare you! Of course, unlike a classic hoarder, all of these items will actually be used. The reason they keep getting purchased is because they are things I use in meals or as condiments, and they keep getting lost in the void of that shelf-from-hell.

I guess I better get cooking……

Like Loading...
This entry was posted in Are you kidding me?, Cooking, Food, Humor, Shopping, Uncategorized and tagged cabinet from hell, corner turntable, kitchen surprises, stocking up. Bookmark the permalink.