I lost something today.

My birthday morning was spent hopping from place to place with a very old friend. After opening a goody bag full of fun and thoughtful gifts, we headed for Starbucks for a free birthday Cold Brew. Then off to a local CSA plant sale for tomato plants. Onward to two different hardware stores for wire tomato cages and flower bulbs. It was a nice day, culminating with a plan to take our dogs for a romp. But when I got home to fetch my dog, I discovered the chain around my neck had broken and the silver spiral pendant that I have been wearing almost daily for about the last twenty years was gone. 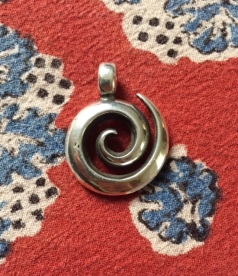 The pendant was not just any piece of jewelry to me – it held substantial significance and emotional importance. When I had first seen it years ago, I had such a strong reaction that I bought it right off the neck of a sales girl in Sedona. It was something I purchased for myself while on the verge of a life-altering change. Throughout the years it has been worn for all occasions, including through hell and back.

Spiral designs have been discovered as far back as 10,000 B.C. and exist in a multitude of cultures.  People are drawn to the symbolism for many reasons – they can signify continuity of life (birth, growth, endings, beginnings again), nature (galaxies, hurricanes, whirlwinds, tornadoes, whirlpools, snails, shells, plants, animals, vortices, black holes, DNA, fractals, The Fibonacci Sequence, the hair whorl on the crown of a baby’s head), infinity, and more. All of these things appealed to me, but it goes well beyond that. It is a symbol of change and evolution, and I was on the brink of a major transition at the time it came into my life. In addition, it is the spiral shape of my very curly hair, which has defined me since birth. It is also the shape of the cochlea within my ears that are damaged and responsible for my deafness.

My silver spiral was a substantial piece, about the diameter of a quarter. One side was cut in so that if you ran your thumb across it you could feel the edges, which were not rough but very tactile. The other side was smoother and rounder, almost as if it had a male and female side to it. If held long enough, you could feel it warm in your hand. It originally hung from a snake chain which was comfortably long enough to be able to play with it while wearing it. I would find myself holding on to it while in thought or concentration, when worrying, during moments of stress, distraction, or even times of enjoyment.  It became an unconscious habit. While I didn’t wear it every day, most days it was against my collarbone and has become a part of me. I have actually envisioned that someday after my death, one of my children might want my spiral as a memory. Perhaps not, but sometimes those weird and somewhat maudlin thoughts can go through your head. Eventually the original chain, a rather odd length at 19 inches, wore out. In the interim, while waiting to find the right one again, it was strung on a thinner, shorter chain. That was the one that had broken.

One of my young grandsons has a little piece of cloth with an animal head that he sleeps with and often keeps nearby for comfort. He calls it his Lovey. He doesn’t need it with him all the time, but when he feels he needs his Lovey, it is important that it be available. When his Lovey periodically becomes lost it is always cause for distress. Because of this, my daughter found a “Backup Lovey” for just-in-case. This lesser Lovey temporarily became “Car Lovey” so that it could go in the car while the more important Lovey would remain safe at home. Car Lovey is not as special as original regular Lovey, but definitely good in a pinch. Eventually he will outgrow his Lovey, but in the meantime it serves a purpose. 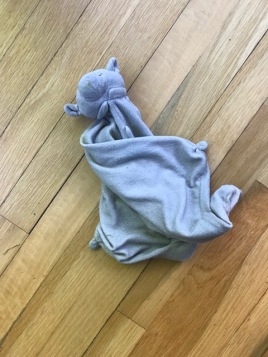 There were actually a few times where I thought how sad I would be if I lost my spiral. While there are many other beautiful spiral pendants out there – indeed over the years there seems to have been an upsurge in their popularity – none seem to have the exact heft and feel that resonates exactly with me. I have looked for the same spiral but have never found exactly that one again. More than once the thought has occurred that perhaps it would be a good idea to find someone who could make me a new one from a cast of my original so I could have my own sort of  Backup Lovey. But that idea was never pursued. Perhaps it is a ridiculous idea, highlighting my attachment to things.

Upon the discovery of this loss, there was at first a mild sense of disbelief. Really???? And I lost this special item on my birthday???? Doesn’t that just figure!!!! What does this mean? What is the universe trying to tell me?????  The search began in my driveway, along the garden beds where the new tomato cages had been placed. Among the poppies, the porch, the stairs, the dining room, the kitchen, the bedroom. Along the fence, beneath the Rose-of-Sharon. Retracing my steps. Nothing. A sad, sinking feeling hit me. I lost my Lovey.

I texted my bad news to my children (we share all our news) – “I lost my spiral!”. They were aghast. “Ugh 😦  like it fell off your neck?”…“Oh no!!!!” I contacted my friend K. and headed over to her house to see if it had fallen off in her car. Not there. I realized I was going to have to return to every place we had been and walk backwards through the morning everywhere I had stepped. Even though K. had been just about to plant the iris bulbs she had purchased and we were planning on a dog walk, she graciously offered to accompany me back to all those places, theorizing two sets of eyes would be better than one.  Feeling grateful, we got into the car and headed back. That is where our philosophical discussion began.

We talked about what it feels like when you lose a piece of jewelry, like one of a favorite earring.  I conceded it was not as devastating as losing the bracelets my father had gifted my sister and I as a children, or my mother’s wedding ring.  But still, pretty upsetting. Perhaps my time with the spiral was meant to end and it was time to let go. If it is not found, perhaps the person who does find it was meant to have it for some reason. Nothing is forever. Everything has an end. Things change. The futility of attachment. Life is transient.

“Impermanence, also called Anicca or Anitya, is one of the essential doctrines and a part of three marks of existence in Buddhism.  The doctrine asserts that all of conditioned existence, without exception, is “transient, evanescent, inconstant”. All temporal things, whether material or mental, are compounded objects in a continuous change of condition, subject to decline and destruction.”

While Buddhist tenets in theory make sense and speak truth to me, I have always struggled with them in practice. Perhaps this was a strong lesson in acceptance. Perhaps this loss, which occurred on the day of my birthday, was not inauspicious but actually a kind of gift which would lead me into the contemplation of impermanence and letting go. But I was not ready to just let it go so easily.

As the day warmed and moved into afternoon, it was back to the CSA plant sale to scour the area. While searching, we discovered a small snapping turtle walking across the grass. Drawing upon magical thinking and surmising how profound it would be if that little turtle led us right to the spiral, I almost believed that could occur. It didn’t happen.

Into the parking lot at Home Depot, peering under cars, scrutinizing the floor of the nursery section, leaving word at the service desk. Not there, not there, not there. Next, the second hardware store where they promised to call but nobody saw it. Sadly I drove home and made another tour around the back yard, under the Solomon’s Seal, around the hostas and Jack-in-the-Pulpit, under the peonies, behind the newly planted basil. Nothing. It was probably in somebody’s pocket right now, a found prize, an alluring talisman, a silvery charm. I was envisioning reward posters taped up in stores and “lost” posts on social media. I had to get over it.

Turning to go back into the house for yet another sweep, a glint of light flashed at the top of the driveway by the garage, next to the old tomato cages from the previous year that the S.O. had mangled and crushed when he backed over them with his van. While tangling with them as I dragged them over to the metal scrap pile, they must have broken my chain. There was the spiral, sitting on the cracked blacktop. 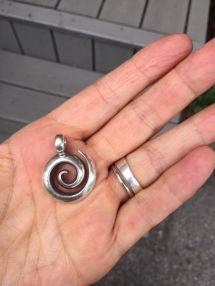 It was an odd and unexpected sensation. Picking up my spiral from the ground did not result in a rush of relief in so much as just a solid and familiar sense of “home” – sort of like the feel of your house key in your hand when you blindly run your fingers over it and are able to open the door in the dark, or the sensation of comfort as you absently stroke the fur of your dog.

Upon inspection, there is now a little dent on the inner curve of the smoother side, a tiny scar. I carefully tucked my spiral within a pouch inside a drawer until a solid, strong chain can be found for it,….and might pursue finding a place to make a spiral Backup Lovey, which, while not the same, might be nice to have as it is not unlikely that this spiral will someday be lost once again in the future. For the meantime, finding it safe and sound felt like a birthday gift, but the lesson is not lost on me.

This day ends with contemplation of the acceptance of impermanence.

“All Things Must Pass”.