There are two different cactus plants, two spider plants and an Air Fern “growing” in my office.  The cacti are crammed into pots that are pathetically undersized. They are also missing most of their soil because they have been knocked off the window sill so many times and never refilled.  The arm of one of them has actually been broken for months and yet continues to grow, propped up against the side of the pot.  That cactus is very small, but it is about ten years old. I do not understand how it is these neglected plants continue to subsist, but they do.  I suspect that the spider plants might be surviving because the woman in the next office gave them to me and I think she secretly waters them when I am not looking.  In contrast, her office looks like a greenhouse in a botanical garden. It is filled with all types of plants with lush, healthy foliage.  She cannot understand why I keep plants and am not taking care of them. She keeps giving me “easy” plants in hopes I will pick up the ball.  Two of them seemed to be doing very well – the Air Fern and a cactus with remarkable yellow flowers.

The Air Fern – well, that gift from my botanical coworker was specifically aimed at the reputation I earned at work for

being a “Black Thumb”.  The Air Fern is supposed to thrive on neglect, requiring no water, no light, nothing but air –  and I will say, my Air Fern has been doing terrific under these conditions.  It didn’t seem to grow very much but at least it has been alive.   It was almost a year before we figured out that the Air Fern has not been growing at all as it is not even a real plant, but some sort of dyed coral in a pot.  If that wasn’t bad enough, we also figured out that the beautiful yellow flowers that have remained ever in bloom on one cactus were actually fake flowers made of yellow paper and stuck on with glue!

I don’t know how I have deteriorated into this state of house plant neglect.  It seems to go in cycles.  Once upon a time my windows were like a verdant, flowering jungle – honest!   Next thing I know they are curled up and brown and the plant police are giving me disapproving looks.  I will also admit that I have deliberately committed planticide.

My first official houseplant was a Wandering Jew (Tradescantia or Spiderwort), originally by way of cuttings given to my mother by her bohemian artist

friend named Billy Hoffman; thus the plant took on his name.  I took the plant away with me to my college dorm, where it thrived and occasionally even flowered.  It got huge. It was incredibly healthy.  I gave cuttings away to all my friends and anyone who happened to admire “Billy”.  I took Billy Hoffman every place I moved to subsequently.  I schlepped Billy Hoffman across the country in a Volkswagen, packed between the dog, the guitars and the duffels.  Billy has lived in three states, on two coasts, and many locations within those states.  I kept Billy Hoffman for over fifteen years and it was a hardy, healthy plant.

One summer I decided to hang Billy H. out on the side porch of the carriage house we were living in (see Little Brown Bat).  I don’t know what happened, but I guess since it was out of sight (nobody ever went out on the side porch) I really didn’t think much about watering it.  When I did happen to notice that the plant was getting straggly, leaves were dropping and it clearly was drying out, I would reluctantly give it water, but something – and there are many theories here –  caused me to start neglecting my plants.  Billy H. wasn’t doing well, I knew I had to take care of it, I knew I had a long-time relationship with this plant, and yet I wasn’t fixing the problem.  This was also occurring with a Christmas cactus that was hanging inside the main room of the house  and a very large, old jade plant on the front porch– both which I had also had for years .  I had to force myself to water them.

At the very end of autumn I noticed the remnants of Billy, straggled, limp and mostly dead, looking pathetic.  I supposed I could have taken it inside, done a major cut-back, cleaned it up, fed it and revived it.  But instead, I unhooked the hanging pot from the overhang and drop-kicked it over the railing of the porch into the woods below.  Planticide.  And to an old friend no less.  I just didn’t want to deal with it. I don’t know what came over me.  At that moment I didn’t care, and I think I was almost relieved for some reason.  Of course, years later I came to regret that act, and sometimes I still do.  Metaphor for a marriage, perhaps.

Since that time, this same phenomenon will occasionally occur.  I managed to keep an Oncidium orchid going for nine years and then – Blam – I let it dry out.  It was a beautiful plant with a spray of flowers like a cloud of yellow bees, although I will admit it did not take well to 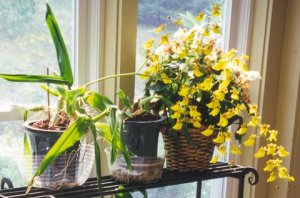 the last two moves.  Perhaps I started ignoring it because it wasn’t responding and I didn’t want to nurse it. Orchids are fussy anyway.   Or perhaps it was time to break the connection of where it came from.  The jade plant made it to over twenty years, and was a regular fixture, although there was not the same attachment as there had been to Billy Hoffman.  The jade also needed to have more soil added, and I think it got some disease because all of a sudden it turned mushy and died.  Gone.

The oldest plant in the house now is an Aloe I have had for decades.  I have given pieces of it to almost everyone I know. This original grandmother of an Aloe is crammed into a pot and also needs more soil.  I recently divided andshared some Clivia with a friend and one of my daughters, ensuring that someday maybe it will come back to me if this one doesn’t make it.  After dividing, it actually flowered for the first time in a couple of years, so you see, I can still manage houseplants if I want to.  I also have a very cool purple Oxalis and a couple of cacti that are bursting out of their pots. I hate wrestling with cactus; I just have been putting that chore of repotting them off.  They do so well with neglect, but when you have to deal with them, they are really unpleasant to handle.

I did lose my Venus Fly Trap from the NY Botanical Gardens gift shop though.  I was bummed about that.  It was doing great until we had one of those visitors who lets their kid run wild and touch everything.  She kept messing with the traps and within days they had all turned black.  I kept hoping it was just going dormant and would revive, but I have been staring at a dead empty pot with a couple of shriveled, blackened little leaves for months now and it’s not looking good.   I have a collection of dead plants in pots interspersed with the live ones. I will get to it eventually. Despite all this, I have managed to keep the plants on the home front going for the most part.

The ones at work are another story.  I just cannot get excited about them, which probably is a direct reflection of my state of mind.  The same coworker who so thoughtfully gave me the Air Fern and the cactus with the fake blooms on it found yet another perfect gift for “The Black Thumb” and presented me with a Resurrection Plant this past Christmas.   The Resurrection Plant is a little brown tumbleweed that you water and

it “comes to life” by rehydrating and turning green as long as you keep it wet.  If it dries out, you can rehydrate it yet another day.  Supposedly you can do this over and over again for fifty years!  It says so right on the box!  However, my Resurrecti

I have to wonder – if the condition of my plants reflects the state of my present mood/emotion/mind,  could it work in reverse…..?  If I tend all my plants to vibrant health, could this reflect on state of mind, which in turn might translate onto everything else in life?