I will be blunt and maybe a bit vulgar here – yesterday morning I stepped in cat shit, and that is exactly the word I screamed after stepping in it. Since there are no young children in the house at the moment, I did not yell out “Poo!”  I had gone outside to empty some vegetable peelings into the composter and when I came back inside, I discovered I had stepped in it and tracked it all over the newly cleaned kitchen floor.  Shit!

Prior to this event, the kitchen floor had not been washed in almost two weeks and had been both an eyesore and the subject of some back and forth bantering between the S.O. and myself.  The fact that it had just finally gotten cleaned and now was besmeared with cat feces was disheartening.  This occurred five minutes before I was to leave for work.  I did not take it very well.

Moving to this urban environment has meant our local fauna, which was once deer and coyote, has now become squirrels and  feral cats.  Up until recently, the cat sightings have been regular but not anything much to write about.  Glancing out the window, you might see one furtively slinking around the corner of the barn and garage or dashing across the patio, or maybe sunning itself in the driveway. It has pretty much been the same one or two, who are not there every day but seem to traipse through as they make their way around the neighborhood.

However, over the last two months or so, there seems to be an explosion of strays around, especially in our own yard.  Pulling into the driveway in the evening, gray and white kittens burst out from under the fence, darting dangerously close to the car tires.   A cat will be lounging 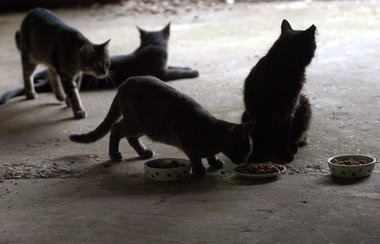 on top of our patio table, where he will toss an insulted look before springing off and disappearing under the foliage in the garden.  A large, bedraggled looking tom lurks beneath the scrap metal that the S.O. has stashed under the portico. I could not figure out why they have suddenly all shown up at our place, until one morning as I was pulling out of the driveway I noticed that someone had placed water bowls, a dish and a can of cat food against our fence.

The person feeding the cats in our yard is the neighbor across the street.  She is involved in local politics and is also an Animal Advocate.  She is perhaps in her late sixties or early seventies, I am not sure – and is fond of wearing very, very short shorts, reminiscent of the “hot pants” of the early 1970’s.  From a distance she looks like a lithe, young, attractive woman with long blonde hair.  Up close reveals heavy make-up which has been applied crookedly –  lipstick that bleeds past the outline of the mouth, wobbly eye-liner.  She has ornamental law ornaments, flags, wreathes, dried flowers and lights tacked to the outside of her house.  She lives alone, and yet weekly she puts out about eight large bags of garbage (this particular observation was made by the S.O.). The few times I have spoken to her, she has alternately been either friendly and nice or totally dismissive, while giving off the air of an eccentric, which is pretty much her reputation in the neighborhood.  I know we all have our own personal eccentricities, myself being greatly represented. Normally I would say I am a fan of the eccentric, at least to some degree.  I am just painting a visual picture for you here.

She has decided she is going to trap and rescue all the stray cats in the neighborhood and bring them somewhere (not exactly sure where, since no place will take them, including our local shelter).  To achieve this, she has strategically placed food in other people’s yards, including in our driveway along the fenceline, which will lure these cats.  I have not seen any actual traps anywhere near the food, although she claims she has caught a number of cats so far.

The first time I discovered the food dishes and cans under the bushes next to our driveway, I told her that the cats were crapping in our garden and running out in front of our cars and that they seemed to be multiplying in our yard.  I said I would appreciate it if she no longer fed the cats on or near our property, that it had become a nuisance and we would prefer if she put out her cat food elsewhere.  After listening to her discourse as she went on about the strays and her trapping plans, she finally agreed to do that.

But the cats are still running all over our property, even more so.  Not only that, they have now been joined by opossum and skunks cashing in on a free meal. 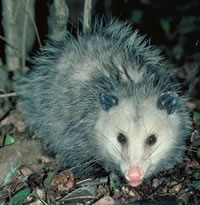 Back to this morning, needless to say I was a bit upset after the cat crap fiasco. I think the fact that I was wearing boots with deep treads made it worse. After cleaning my boots, scrubbing my hands, washing the floor, and then finally getting in the car and backing out of the driveway to leave for work, I noticed that once again the cat dishes and food had been placed next to the fence in our driveway.  Apparently she has been leaving them there at night and then picking them up early in the morning.  This, after she said she would stop doing it. How disrespectful. This really ticked me off.

It was about 7:30 am at this point.   I got out of the car, picked up her cans and dishes and walked over to her house.  Placing them on her porch, I knocked at her door few times.  First there was no answer, then she suddenly burst out of the door.   I could not help but notice that her clothing was absolutely covered in cat hair from top to bottom, as if she had been rolling in it. She looked like a hair rug.  And I am standing there with purple hair and furious. Can you just see it?

I explained again what a nuisance the feral cats in our yard have become. “That’s why I am trapping them”, she said.  I told her I stepped in cat crap this morning and that they were doing it in my garden beds. I told her I have grandchildren that come to my house and I don’t want them exposed to this. I pointed out that these feral cats are not vaccinated (“And that is why I am trapping them!” she reiterated.  What does that mean? Is she going to get them vaccinated and then set them loose again? Apparently yes, she is in support of TNR – Trap, Neuter, Release – for feral cats.  I explained that they can carry toxoplasmosis, and furthermore, I am actually allergic to cats. I asked her why she wasn’t feeding them in her own yard.  She told me that two cats had gotten run over in front of her house, “Right here in the street!”,  so therefore she was feeding them in our yard, among other strategic places throughout the neighborhood.  Of course, the same street in front of her house is the same street in front of mine – I honestly don’t see what the difference is whether the cats run into the street from her house at Point A or my house at Point B…… but the logic in this conversation seemed to be rapidly unraveling anyway. Wanting to appear as reasonable and calm as possible, not once did I mention that on top of everything else, she was actually trespassing.

As I expressed my distress and displeasure with the situation and she continued to defend her position, she began to get a suspicious, defensive look on her face….  a look that clearly said “You are a cat hater!”  Even though she didn’t say it, I could almost see it in Big Print.

I have had cats in the past but I don’t have them now, due to aforementioned cat allergies.  Subsequently, my affinity is for dogs.  But suddenly I felt like I had to defend myself to her, less she misidentify me as someone who hates animals. There was no point arguing with her.  I hoped she would respect my request and take her cat food elsewhere. I left for work.

Outside the back door this morning, there were two rather runty looking cats catching some early sun rays on our porch. They took off when the door opened.  How this feral crap will resolve itself remains to be seen.