I didn’t plan on attending Levon Helm’s wake today. Yes, I had been a fan of The Band for many years, but I dislike crowds and am seriously averse to fan/fame worship. And yet, on some level I was still feeling a distant, unaddressed sadness that I was trying to analyze while driving home from an upstate medical appointment. Coming upon the exit, I figured I would just drive by the parking lot to check out the scene and see if there were unbearable crowds before heading home. But before I could even discern this, my car turned into the drive as if on auto-pilot.  I was immediately waved into a parking space, got out and found myself standing with somber, quiet, orderly people and a low-key news team for all of about two minutes before boarding a bus for the short shuttle to the Helm barn and studio, where Levon was laid out for his final Ramble home. Without conscious thought, easy and just like that, I was there.

April has been a bit hard on the Boomers. For me, there has been a bit of synchronicity and coincidental weirdness which incorporates these losses, both distant and close. In addition to Dick Clark and Levon Helm who have been fixed into the personal evolution of many of us, it began in my realm on a less famous scale with the unexpected death of C, an acquaintance who was an integral part of the local Woodstock character and color.  You would see her in her jewel-colored shawls, walking on the street, down by the library, opening up the community center.  I would see her at my friend’s home at holiday gatherings and events. She was always there. Always. Then, in three short weeks she wasn’t anymore.

The week after that, J, a sweet, developmentally disabled man who had been in one of our programs at work – a tough little fighter of a guy whose strength and outlook was an example to all – succumbed to cancer after beating the odds for years. Just a few days later my Significant Other’s Aunt B passed away the day before a scheduled surgery – a feisty, intelligent, artistic woman and long time Woodstock resident whose loss leaves a hole in the family and community; and a reminder that the next generation has now become “the elders”.  Following that, I spent a rainy weekend morning with my siblings, planting flowers on my own mother’s plot on the anniversary of her passing.

So there we were, standing out in the cemetery at Aunt B’s funeral, where final words were being said beside her open grave. I stood off to the side and avoided stepping on the stone right next to her spot. Gazing down, I noticed a few guitar picks scattered in the grass and looking closer, discovered that Aunt B was going to be lying immediately beside Rick Danko.  Rick Danko of the iconic band, The Band, who passed on just shy of 57, forever young.  A piece of our collective youth that had slipped away. While the prayer continued, a memory suddenly came to me of a time long forgotten but now as unearthed as the grave. Leaning over to the S.O., I whispered into his ear, “Look who Aunt B is next to!” Then leaned in again to add, “You know, I kissed Rick Danko“.  And then I had to stifle a smile because you know, we were at a funeral after all. 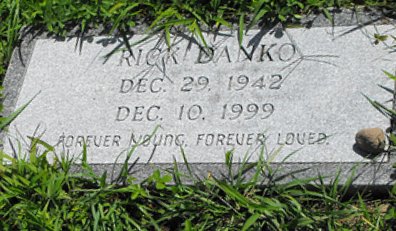 Although it makes a good title, there really is not much to the story about kissing Rick Danko.  It is not juicy or romantic or even gossip-worthy. I believe there are throngs of women who could say they kissed Rick Danko, and much more. I am sure there are plenty of great stories out there.  I believe alcohol or some other pathway to the altered state probably would have been involved in many of those stories too. However, the ridiculously silly, simple story here was that a number of us (in what I would now consider “our youth”) went to see Danko in one of his post-Band era incarnations.  Following a kick-ass show and while in our 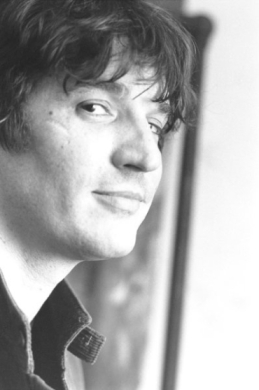 slightly intoxicated state, our overly excited groupie friend Debbie rushed the stage…… and I, who had prided myself on being an adamant anti star-worshipper, got caught up in her momentary insanity and rushed the stage along with her, right into Rick’s equally inebriated arms.

Immediately afterwards (yes, immediately) I felt mortally embarrassed and indeed have had to live down the laugh-inducing retelling for years, until that childish incident in time thankfully faded into the oblivion of our past.  I had totally forgotten it….until Aunt B’s funeral last week.

And then former Band mate Levon Helm passed away and here I am on the bus to his wake. The woman sitting next to me on the bus is clearly saddened and her doe-eyes look about to brim over with tears. She turned to me and said “I just can’t believe it. I used to clean his house years ago”. I told her how we just buried Aunt B last week and how I was standing over Rick Danko’s grave. I told her I had just remembered kissing Rick Danko during the funeral and now Levon Helm is dead. I don’t know why I had to tell her that and I don’t know if my connections from one thing to another made any sense to her. Somehow, I felt she got it. I guess it all felt so circuitously connected at the moment.

We got off the bus and went inside and paid our respects.

I don’t worship famous people. I don’t do the fan thing. And yet I felt like I wanted to cry. For Levon, a talent and musical catalyst lost. For C and Aunt B,  two more beloved Woodstock residents gone. For J, who fought cancer philosophically and with courage. For my mom, whose loss is with me as much today as the day she left this earth. For Rick Danko, in a bar long ago, and a couple of silly girls caught up in a moment. I wanted to cry for the stark reminder that another silver thread woven into our coming of age, another one of those experiential fibers which have shaped us, has been broken. 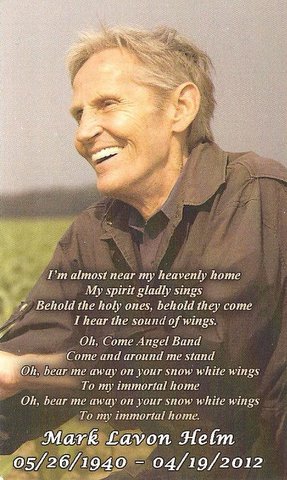 9 Responses to I Kissed Rick Danko